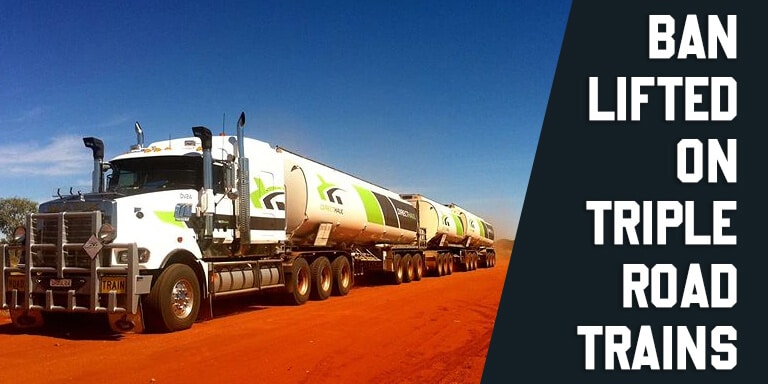 After extreme weather conditions disrupt logistics in South Australia, the government has lifted the ban on triple road trains. Some towns in the Southern state have received a quarter of the annual expected rainfall in just an hour.

The Trans-Australian Railway carried almost 80% of the logistical demands in SA. After heavy rains disrupted the supplies, leaving Perth’s and the rest of the states with empty supermarket shelves, a temporary ban has been lifted. To cope with food shortages, the army was also deployed to conduct emergency food drops in certain towns trapped by the floods.

A shortage of essential items such as dairy products, toilet paper, and meat products, was reported from Perth. Western Roads Federation CEO, Cam Dumesny stated that the conditions were not expected and has taken everyone by surprise. For this reason, there is no set of protocols or rules that are to be taken. Improvisation is certainly required.

Woolworths has put a limit on toilet paper as well as meat products per individual meaning that hoarding is not allowed. WA Transport Minister Rita Saffioti also stated that the road trains were an emergency measure taken to offload some of the burdens on railways.

Small as well as large logistics businesses have urged the federal government to infuse more cash flows into the national roadways. Although some of the essential food items are sourced from South Australia itself, some things like pasta and some spices are transported from the east.

The WA government has also called an emergency meeting to tackle the situation at hand. A temporary solution has been decided wherein triple road trains will supply from Whyalla to Kalgoorlie. From there, the railways will supply the cargo to Perth. The Bureau of Meteorology has warned the southern state to expect conditions to continue like this for a while with towns such as Coober Pedy surrounded by water from all sides.

The ‘land bridge’ idea will take off some of the burdens from a single route. Alternative routes would involve roads, rails, as well as maritime. Rita Saffioti said that such conditions raise the necessity of having more resilient systems all across Australia.