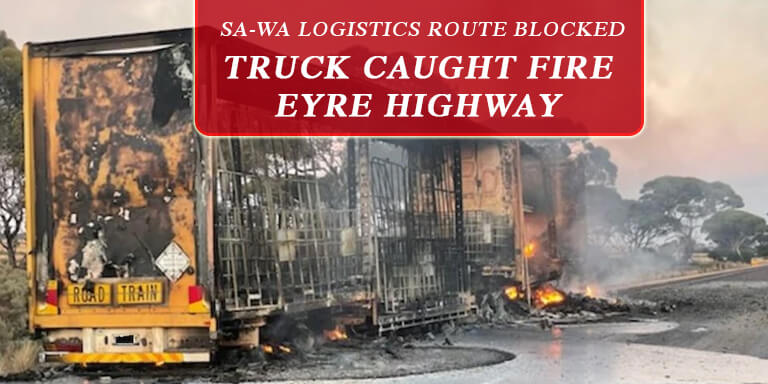 A truck carrying chemicals caught fire on the Eyre Highway that connects the states of South Australia and Western Australia. The driver of the truck was quick to react and escaped without any injuries.

The truck carrying cyanide-based chemicals caught on fire at around 4 AM on January 14th. Fireys and police were called at Coorabie. Although we are unclear of the exact location of the accident, the fire was reported from somewhere around 100 kilometres west of Ceduna. The CFS (Country Fire Service) were quick to respond to the situation. Two CFS trucks reported to the situation at hand.

The driver of the truck had the presence of mind to detach one of the trailers to minimize the damage as well. Due to a large amount of hazardous spills and putrid smell, the highway had been closed off for a while. The toxic smell and fumes suggest that the chemicals in the truck are cyanide based.

The major throughway between SA and WA had been closed in both directions causing delays and mix ups all around for around 6-7 hours. At 11:22 AM, the SA police tweeted that one of the lanes was open for business again.

At around 6:50 AM, the SA police officially warned the public about the closure on the major highway. The Eyre Highway is an important logistical route for FMCGs and raw materials. The freight route is a 1660 kilometre long stretch and links the two states of SA and WA and also forms a part of the national highway network connecting Perth and Adelaide.

This was not the only accident on the throughway though. Another truck, this time not carrying any toxic materials, crashed into a tree. This happened around 6 AM in Miranda. The driver was seriously injured and was immediately rushed to the hospital.

The cyanide spillage disrupted routes on the highway for a while and caused a few issues but the situation is now under control and the highway has opened up.