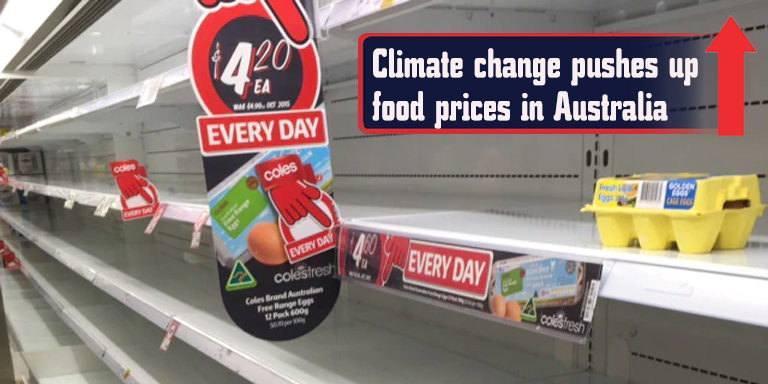 The country’s supply chain always pops into question whenever there is a ‘slight’ hitch. Be it the coronavirus or rising waters, the war in Ukraine or global warming, Australia’s rising prices across services and commodities deserve an in-depth analysis.

Climate change is deemed to be one of the topmost factors ruling the increasing FMCG prices in Australia. Temporary factors such as war and floods also act as catalysts but global warming has exposed the fragility of the Australian supply chain. As droughts become more frequent across the Australian landmass, it is right to expect that lower crop and dairy yields, along with more stress on meat production will be the new challenge.

Queensland and NSW are all in the news due to rising waters but this is not the only issue. It is the erratic nature of the Australian weather catalyzed by climate change that poses a true challenge for Australians.

Higher operational costs to get the same yields also pile additional stress on the system. Australians are to expect smaller shelf lives and fewer options when it comes to food items in the coming years. With the available food items, it is also reported that the nutritional value is decreasing.

Australia’s climate has risen approximately 1-degree celsius since 1910. If the increase clocks a 2-degree Celsius mark, the result will be more devastating.

The War in Ukraine is Not Helping

As Russia piles pressure on major Ukrainian cities, oil prices are surging across the globe with Australia in the mix. Wheat and barley prices, for example, are expected to take the biggest hits. Ukraine is a top exporter of wheat, barley, and corn. Australia, although growing its own wheat and barley, also imports some from the war-torn country.

Not only this, but sanctions on Russia are also driving up oil and gas prices. The ASX is following a downward curve with some hops and jumps in the middle. Food insecurity in Australia is not as much of an issue as it is in third-world countries but the problem remains at hand. The common man will pay higher prices for basic necessities and that is the bitter truth.