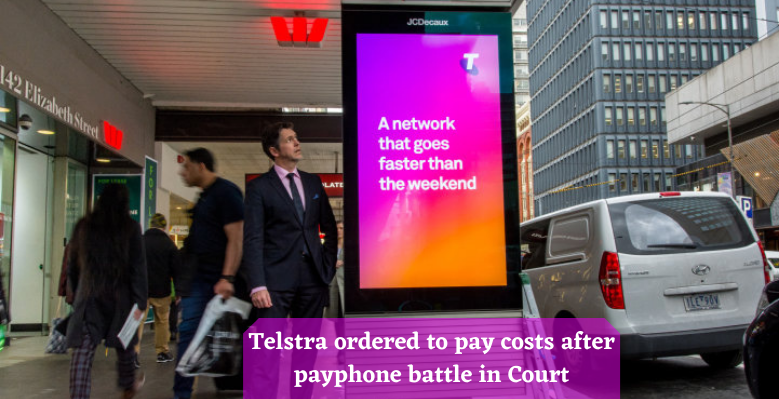 Telstra will be required to pay legal charges after losing a “David and Goliath” Federal Court fight on super-sized payphones.
The tech giant has remained entangled in a long-running battle into the cities of Sydney, Brisbane, and Melbourne over proposals of installing 1800 new payphones. And it is emphasizing large LCD screens, which is capable of screening at least four advertisements in one minute.
In May 2019 in Federal court, Telstra filed proceedings to explain the law after the City of Melbourne denied its petition for permission to operate commercial advertising on 81 proposed new payphone billboards.
Telstra is allowed to install “low-impact” public payphone booths or cabinets without a preparation license if several other conditions are met; it gets permitted under Commonwealth law.
Then, Telstra clarified the new payphones existed were “low-impact” because payphones were not practised to promote commercial advertising “when they are getting installed”, and plan permission would be needed for them to do so.
But the councils said that the payphones were not “low impact” because they can display third-party advertisement, and should accordingly be subjected to the usual council planning permission process.
In March 2020, David O’Callaghan, the Justice of Federal Court said, Telstra’s new payphone cabinets with 75-inch LCD screens were “low-impact facilities” while the digital screens were practised only to improve the regular telephone service.
He declared that the councils have to pay Telstra’s charges.
The cities of Brisbane and Melbourne appealed this decision, in the Federal Court on Friday.
Justices Michael O’Bryan, Natalie Charlesworth, and Jacqueline Gleeson set aside of Justice O’Callaghan’s ruling.
Telstra gets ordered to pay costs to Brisbane and Melbourne city councils.
Telstra will recognise appealing the newest ruling. A spokesman said, “Telstra respects the decision of the Full Federal Court and is currently considering its options.”
On Friday, Deputy lord mayor Nicholas Reece welcomed the decision of Federal Court. He said, “public space should be protected.”
“We don’t want somebody to be bombarded with intrusive and oversized commercial advertising on public infrastructure.”