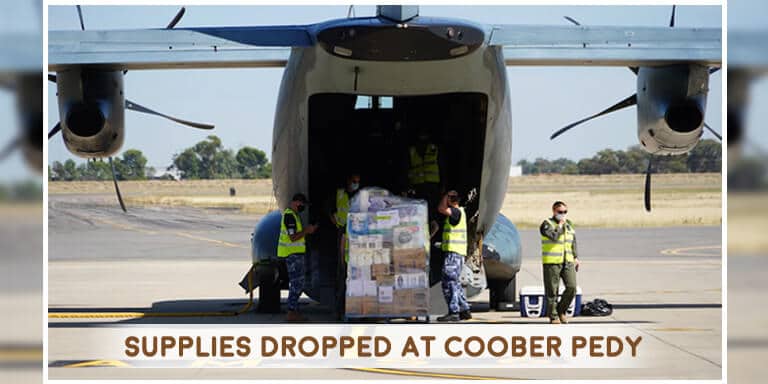 With rail and road both disrupted by the heavy rains in the state of South Australia, the Defense Force responded by dropping food supplies to tackle shortages. The aforementioned will deliver 20 tonnes of food and other essential supplies to the flood-affected areas.

Grocery shipment routes and supply chains have been broken due to the excessive rains in South Australia. The state received heavy rainfall and lots of flooding with major highways getting disrupted. Stretches as long as 250km were closed off a few days ago. To tackle the impending worsening of the floods, the Defense Force is set to deliver 20 tonnes of food and supplies to Coober Pedy.

Coober Pedy is a town on the Stuart Highway and has been in the midst of a natural disaster. The nearest city being Adelaide and falling right into the middle of the floods, it was a natural choice for the shipments to arrive at. A C-27 Cargo Plane has left the airport and is set to deliver the items as soon as possible.

State Emergency Service (SES) chief officer Chris Beattie commented that the supplies include all kinds of essentials including chilled goods, frozen goods, fresh food, and fresh meat. Coober Pedy has been reeling under food shortage ever since the floods began. During normalcy, the town would receive three trucks full of food supplies every week.

The route to Coober Pady has been blocked by floodwaters at Glendambo, about 250km south of the aforementioned town. The blockage at the Stuart Highway still continues to persist, much to the dismay of the natives as well as those visiting from other states.

The highway connecting Adelaide and Darwin has been under flood pressure almost the entire month now, so to say. The situation is also predicted to worsen over the coming few days as well. The State Government is prepared to tackle the issue though. The Federal Emergency Management issued a statement commenting that the people of Coober Pedy and the other flood-affected areas won’t go without food.