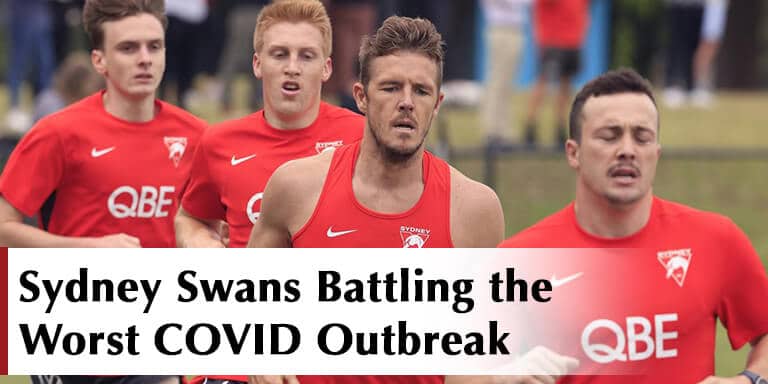 With a drastically rising number of cases in Victoria and New South Wales, the pandemic has made no exceptions when it comes to who it is affecting. The Sydney Swans have reported a large number of positive cases in their main ranks as well as the staff members.

Tuesday witnessed a record-breaking 3057 new cases in NSW as it outran national numbers during this phase of the pandemic. The Sydney Swans who play in the AFL or the Australian Football League have had many members of staff tested positive while away on leaves of absence.

All the players and the staff members who have been tested positive were doubly vaccinated. No surprises there though, as the Omicron variant is known for surpassing the vaccines. Although less severe in nature, the new variant is the most infectious one out there. The official club statement by the Sydney Swans states that the club values the health and well-being of all its members and holds it above everything else.

All the players who are now quarantined were negative after a test on the 15th of December. This fortifies the fact that the Omicron is a wildly infectious variant with a high rate of success. With the season in its initial stages, however, the effect on the ranking of the club will not be affected that much.

Not only this, but the ongoing Ashes Test Series is also considering a change in its COVID protocols. Both sets of players, Australia and England, are under strict supervision in Melbourne and Sydney. The boxing day test match will go on as planned though.

Cricket and AFL are not the only two sports suffering from the Omicron. NRL clubs Canberra, Newcastle, South Sydney, and more, have had interruptions in their training as well. Perth Glory is also quarantined in Brisbane at the moment.

The Omicron is affecting sports all around the world. The English Premier League has had many matches postponed with Manchester United being one on the suffering side of things. A strict change in policy and proper supervision is called for in such a situation so that things can go back to normalcy as soon as possible.