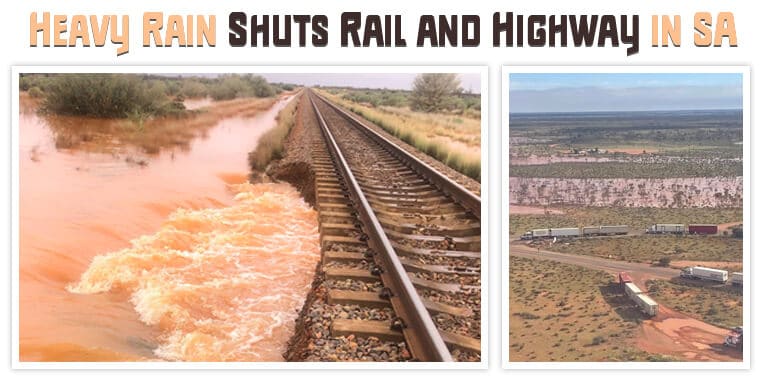 South Australia has received more rain than was predicted this summer. Flooding has damaged the outback railways to the extent that it might take more than 12 days to set everything ‘back on track’.

The outback railways primarily connecting SA to Perth and Darwin have been badly damaged by the heavy rains and rising waters all across the southern state. The series of events have forced logistics to be shifted to other means of transport. Even though the Stuart Highway is also closed due to the same reason, a majority of freight has to be moved via road now – taking detours.

The Stuart Highway from Adelaide to Darwin is closed and drivers have to take diversions and go via Queensland. The economic and operational losses incurred due to this once in a lifetime weather event is pretty shocking as well. The degree can only be imagined once we realize that rail makes up 80% of the total logistics in the region.

Australian Rail Track Corporation (ARTC) said that repairs on the affected railway lines connecting SA to WA and the Northern Territories could take somewhere between 12 to 17 days. Around 8 areas between Adelaide and Tarcoola are closed off due to the excessive rains.

Record-breaking rainfall in South Australia over the weekend has also forced the Stuart Highway to be closed for a while now as a 250 km-long stretch is inaccessible. Although floodwaters are now receding, there is still time before normal services are resumed.

The Eyre Highway is open though and has taken off some of the freight load. Although delays and cancellations in supply are reported, everything is still manageable. Diversions through Queensland are the way out for the moment.

Glendambo BP’s manager, Richard Patridge, mentioned a few days ago that more than 30 of his trucks are stranded due to the ‘swamp’. He mentioned that most of the goods were FMCG or fast-moving consumer goods such as perishable food items and dairy products. Councils for Logistics and Transport in the flood-affected areas have also demanded commercial relief from the national government.