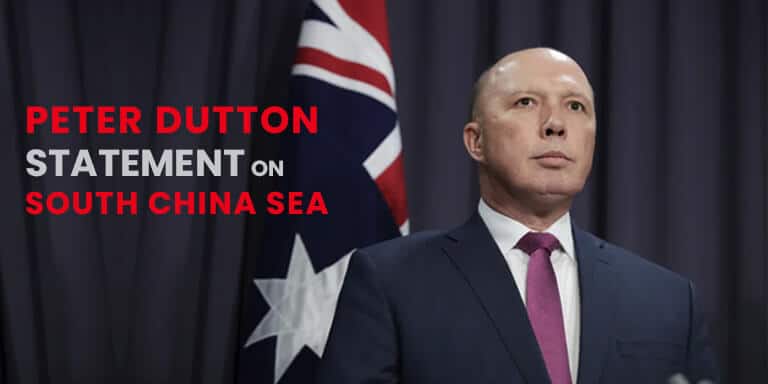 As Twitter blows up with tweets about the Liberal’s party member and currently serving as Defense Minister in Scott Morrison’s cabinet, Peter Dutton, let’s take a look at his statements regarding the quad alliance and the South China Sea.

Controversy seems to be circling around Peter Dutton’s text as angry Australians are trending #VoteThemAllOut after text messages were exposed with many high-level members of the parliament and opposing parties involved. However, to take things away from the main topic of discussion, the Minister of Defense does have a few statements regarding the South China Sea and what regional politics look like for Australia and its allies.

Currently, Australia is allied with the United States, India, and Japan to stand up to the large landmass we call China. Peter Dutton said that Australia would be ready to roll out its first nuclear submarine before 2038 in a bid to have a strong presence in the Western Pacific. He further mentioned that it was of interest to Australia that the United States is also involved in the Western Pacific politics.

Peter Dutton concedes that China has had the upper hand as of now in the South China Sea with Beijing militarising the waters the past decade. To avoid any such ‘failures’ in the coming years, it is paramount, first, for the Australian public to be aware of what’s happening and, second, for the government to make sure that the past decade is not repeated.

After the AUKUS was passed, an 18-month long process was defined by the US and the Uk along with Australia to ensure that nuclear submarines are in Australia’s hands as soon as possible.

Another reason for concern for the Australian defence is that its population is shrinking relative to its counterparts in Asia. This directly implies that the country would have to infuse more cash into its defence budget to cope with China and to ensure that regional stability is maintained.

As aforementioned, it is important for Australia to keep the US engaged in the region’s politics. China is becoming more assertive and more aggressive. In a report by the Sunday Morning Herald, the defence budget to cope with the political changes would have to be $44.6bn more than the previous year – an astounding number indeed.