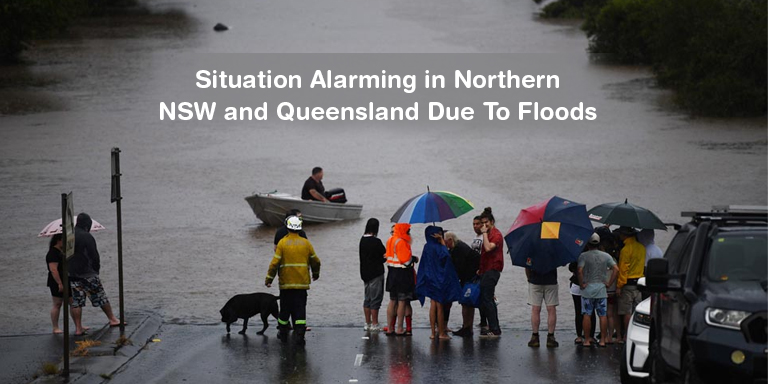 Brisbane in Queensland and Lismore in NSW are witnessing their worst floods in a hundred years. Citizens all across NSW and Queensland are being urged to move to higher ground as the rains show no sign of stopping.

Brisbane and Lismore are just one of the many cities facing a period of trial. Images and videos streaming in from the Brisbane river give a grim preview into the extent of damage done to properties and city infrastructure.

Scott Morrison’s government has initiated a GoFundMe page as a sort of a crowdfunding channel. Amidst some opposition, it is hard to ignore that the initiative does provide a means for people and local charities to donate directly to the cause.

Meanwhile, the State Emergency Services (SES) have their plates full with calls for help across the two states. The Australian Defense Forces are also on the scene, doing their best to take control of the situation.

People living along the Northern River have also been warned to stay alert and to move to higher ground and multi-storied buildings if possible. The SES has been realistic in saying that it cannot help everyone as the risk factor of this catastrophe is increasingly large. Wayne Swan, ALP national president tweeted, “These are the worst floods we’ve seen in the Northern suburbs of Brisbane since 1974.” He also posted images of uprooted trees along a stream.

Similarly, Lismore’s Rocky Creek Dam faces a similar struggle and people living below the dam’s catchment have been warned to flee.

CBDs in cities such as Lismore have been shut down due to manholes flooding over toxic sewage water as well. ‘Rivers’ of distressing muddy waters can be seen along the business district – putting a halt to logistics and transport facilities across the city.