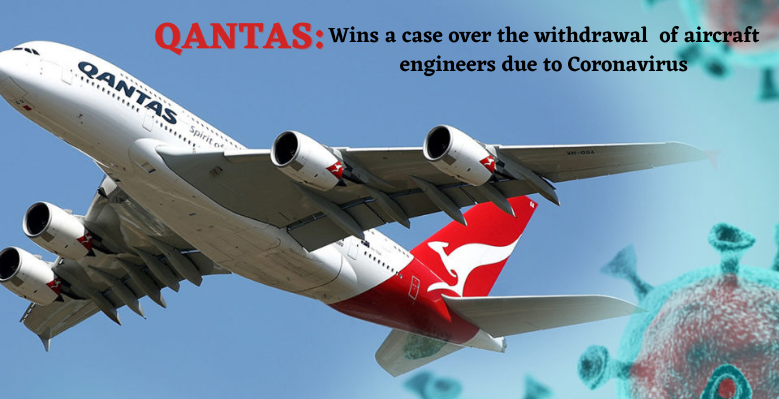 The Federal Court justified a decision by Qantas to fire hundreds of aircraft engineers without compensation after the COVID-19 pandemic. As passenger numbers decreased, about 450 Qantas and Jetstar maintenance engineers were among two-thirds of the staff benched for a month from late March.
In a case that was carefully watched for its possible implications outside of aviation, Qantas requested the court’s assertion that the work stoppage occurred for reasons for which it should not be held fairly accountable.
But the Australian Authorised Aircraft Engineers Association argued that a shortage of buyers could not be treated as a stoppage of work under the workers’ agreement, no matter how serious.
Justice Geoffrey Flick ruled in favour of the airline today and learned that the job stoppage was due to the major stoppage of domestic and international passenger flights between March 29 and April 22. The court found that this “dramatic decline” was not the product of either of the airlines’ actions.
Because of the worldwide pandemic and the actions of the Commonwealth, state and local governments in limiting transport and movements, it was an economic necessity imposed upon the airlines, Justice Flick said.
The evidence of the present case, it is politely concluded, does not come close to a situation where Qantas or Jetstar might have fairly taken other actions.
Qantas argued that the stand-downs were rendered in compliance with the conditions in its agreements and it was not necessary to “usefully hire” the staff.
For Qantas, Barrister Rowena Orr QC said earlier that the pandemic had “challenged the very profitability” of the airlines.
She told the court last month that Qantas would have run out of money in eight to 10 weeks if daily scheduled flights had continued. Ms. Orr said that all other cost reduction initiatives had also been adopted and proven ineffective.
But Lucy Saunders, the barrister of the union, argued that it was Qantas who made the decision to fly or not to fly and thus the decision to stand down staff was beyond the power of the corporation.
The judge dismissed the union’s claim that the stoppage was the outcome of airline management actions.
Justice Flick described the implication that the airlines’ actions were “disingenuous” against their own will.
He said “hopefully special and unlikely to be repeated” were the terms under which the stand-down clauses were used. Standing down our workforce when the market for travel plummeted because of conditions beyond our influence was not a choice we made easily, “said a spokesperson.”
We did so because wasting cash and putting the entire business at risk would have been the option. The business said “ridiculous” was the union’s claim that it should have flown near-empty planes during the pandemic.
It’s disappointing that the union is already spending the resources of its affiliates and the time of the judge on vexatious legal challenges.