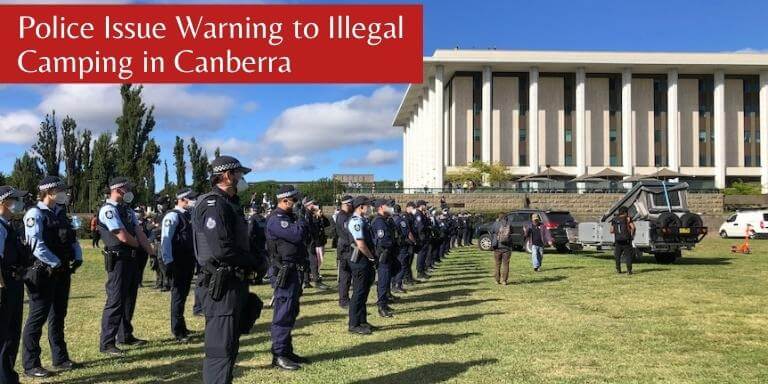 After warnings on Wednesday and Thursday, the police moved the anti-vaccination protesters from the Parliamentary Triangle this morning. Although peaceful protests are allowed in the Triangle, camping and parking without permission are illegal.

At about 8 AM today, the ACT Police began clearing the protestors from the Parliamentary Triangle in Canberra. Many protestors had illegally camped and parked at the spot. After the police made the final announcement before moving in, many people drove away while the police towed some of the illegally parked vehicles. The ACT Police made it clear that protesting is the democratic right of the Australian citizens but any interruptions against the police activity can lead to an arrest.

The protests began on Monday as people started camping and parking on the aforementioned site. Although warnings were announced every day, today marked the final straw in the ACT Police’s patience. The people gathered at the site are protesting the compulsory COVID-19 vaccinations.

The ACT Police and the protestors had a few non-violent bouts since Wednesday. As of today, three people have been arrested from the Parliamentary Triangle, opposite the National Library of Australia.

Signs of ‘Make Australia Great Again’ were seen amongst the crowds. Also, some of the people waved the flag of Australia upside down – a sign of disapproval and protest by the masses. Chief Police Officer Neil Gaughan reported that around 250 vehicles were parked illegally at the spot.

The ACT Police have warned the residents of the city to stay away from the sensitive area. There was an event scheduled to happen at the spot today. Due to the protests, it has been cancelled. Protests against the mandatory COVID-19 vaccines is not a new affair. Australians as well as people around the globe have been speaking out against the compulsory restrictions placed by their governments.

Even pedestrians have been told to stay away from the Parliamentary Triangle. All in all, the ACT Police have been successful in quashing the protests for now. Whether the protestors will return at the guards again is a story for another day.