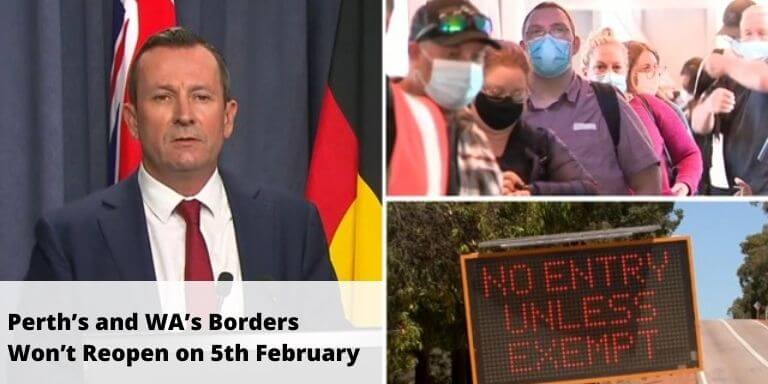 Initially supposed to have opened its doors to international as well as domestic travel routes completely on the 5th of February, WA Premier Mark McGowan has turned back his decision and postponed the relaxation of border rules. Although changes are due to happen in the guidelines, many families and businesses have their plans disrupted by the decision.

The decision by the Premier came in at a time when families were expecting to see a relaxation in the guidelines. The expectations to get back to normal life have been ripped apart for some. People are stuck in the state and cannot travel back home although they have followed all protocols and complied with the authorities.

The decision is, however, welcomed by the labor leaders and their parties. The Premier does not want an outbreak similar to the NSW and Victoria Omicron saga. West Australia has been relatively under lesser stress as compared to the two aforementioned states. The Premier hopes to keep it that way. He wants a larger percentage of the WA population to be vaccinated before he reopens the borders completely.

As is the case with any controversial decision, the pros and cons are always there. Small businesses, no doubt, are facing a tougher time under the guidelines. Supply chains, although not broken, are delayed or disrupted. Also, isolation rules have kept many essential staff members out of work.

Although the time for quarantine for international flights will be reduced to just a week, interstate travellers coming into WA need to do a 14-day sprint as before. Further relaxations in the guidelines are also due. Most of these changes are planned to keep health workers and essential staff members across various industries in mind.

The general mood across WA and families whose relatives are stuck here is not good though. They are questioning Mark McGowan’s decision and cannot comprehend all the reasons behind the alleged ‘political’ move by the Premier. “I don’t know what has happened to our Australian way of life”, a distressed mother of one from Tasmania whose husband is stuck in WA comments.