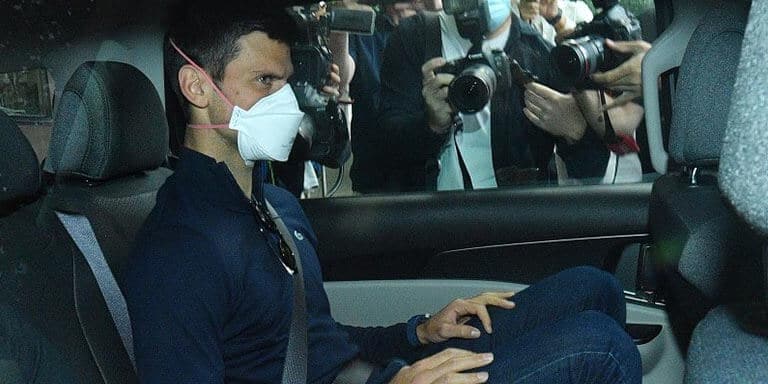 A week-long legal battle unfolded in front of us as Novak Djokovic fought to play in the Australian Open but his visa was cancelled. Anti-vax protests ensued after the 9-time winner was banned from entering the country on landing.

Although the decision has been made that Novak Djokovic, a 9-time Grand Slam winner will not be allowed in Australia for three years, Prime Minister, Scott Minister, said that the sportsman can be granted access if it serves the country’s interests. The PM also downplayed anti-vax sentiments that ensued as a direct result of the sportsman’s ban.

PM Scott Morrison also said that rules are meant to be adhered to and no exceptions can be made for anyone. The country has no ill feelings for Djokovic and ‘under the right circumstances’, Djokovic may be allowed access.

Djokovic’s visa was cancelled after a week-long ordeal at the Federal Court. The Minister for Home Affairs commented that the return of Djokovic to Australia before the 3-year ban is purely speculative. All of these assumptions also rest on the fact that Djokovic actually makes a personal decision of returning to the country. The sportsperson may choose not to participate in the Australian Open after the experience.

The Australian Open begins today – without Djokovic. Minister for Home Affairs, Karen Andrews also commented that reasons to reduce the ban period can be influenced by ‘compelling situations’. Of course, any further applications by Novak will be processed according to the rules. It is all hypothetical as of now.

Novak Djokovic returned to Dubai as soon as the judgment to cancel his visa was made. A recent Instagram post by the sportsman suggested that Djokovic was under the impression that he was exempted from the Australian border rules. He was not vaccinated.

The Australian Government has been facing a lot of criticism on a global scale. Fingers are being pointed and comments have come forth saying that a visa should not have been granted to Djokovic in the first place.

All in all, the defending champion will not participate in the opening major tennis tournament of the year. Let’s see what 2023 brings for the champion.