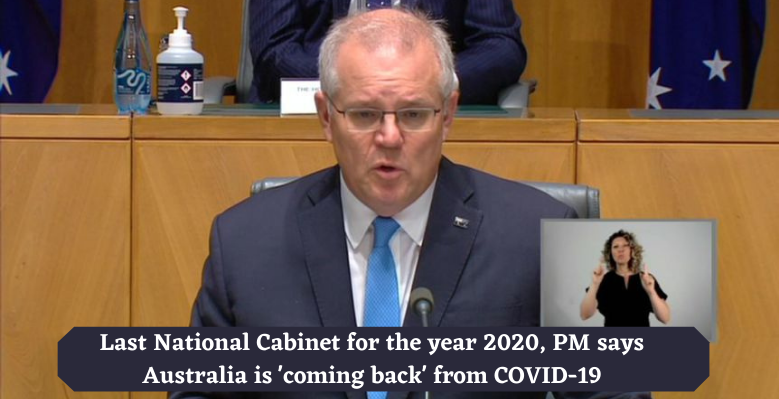 The prime minister and state and territory leaders have presented a united front. They addressed Australians following this morning’s National Cabinet meeting.
Australia’s return of overseas travel and arrangements for seasonal workers, approval, and coronavirus vaccines’ rollout were the centre of today’s discussions.
The meeting held on Saturday is the last 30 National Cabinet meetings of 2020. It is the first time when most of the leaders met face-to-face since March. WA Premier Mark McGowan was the only leader absent from the meeting; he attended remotely.
Prime Minister Scott Morrison’s address was upbeat as he ensured the citizens that our nation was bouncing back from the COVID-19 pandemic.
PM Morrison said, “Our nation is working together, we are working together, and Australia is coming back from COVID-19.”
Prime Minister Morrison presented an update on how many Australians had presently registered with the Government that they needed to go home.
A total of 45,954 Australians have returned from abroad and carried by hotel quarantine under emergency plans implemented by the Federal Government in mid-September.
This figure far surpasses the numbers who initially recorded their intention to come back, but other registrations since then mean a further 38,655 are still expecting flights.
Mr Morrison said the priority for letting people into the country is Australians. He was looking to increase the number of people allowed into Australia, provided there is the capacity.
“We will proceed to monitor through communication directly with people overseas about the need to return home,” he said.
Prime minister Morrison said approximately 5,000 Australians wanted to come home from the UK, but around a quarter, 10,000 or so, wanted to come back from India.
“The Government has organised an additional nine repatriation flights between December 13 and February 20 to fly citizens home from New Delhi, London, Frankfurt, and Paris,” he said.