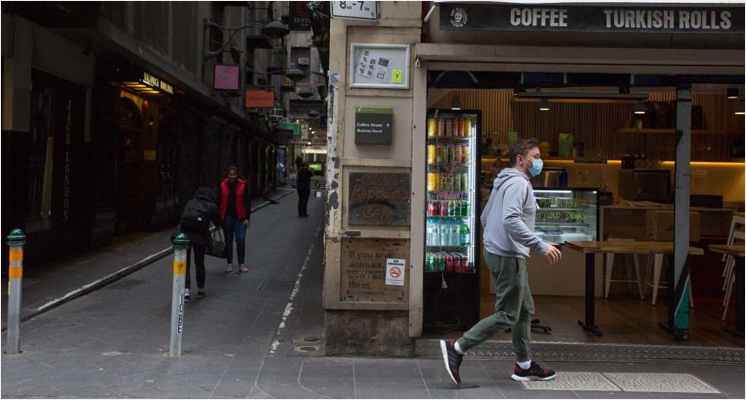 The Victorian state government has promised an additional $290 million to support businesses struggling to survive the lockdown and foster the tradition of outdoor dining that will be enjoyed for “many summers” to come.
Today’s announcement includes $100 million for the only closed or restricted traders to reopen under the second step of the Victoria Roadmap.
The money is expected to go to approximately 33,000 individual dealers across the state, who will be eligible for grants of $ 3,000 to help pay for overheads.
Another $ 100 million will be allocated to the Melbourne City Redemption Fund to help companies set up outdoors, transform rooftops and courtyards, and fund safe COVID events to encourage people to return to the CBD over the summer.
It will be jointly funded by the City of Melbourne and the State Government. This “will completely change the city, not just in the summer,” Industry Support and Recovery Minister Martin Bakula said.
It would be something I think the Victorians will love and appreciate and create a new outdoor dining experience in the CBD that would be enjoyed in many summers.
There will also be an external hospitality package of $ 87.5 million for companies outside of the CBD with a payroll of less than $ 3 million, which will be paid in grants of up to $ 5,000 to cover the cost of umbrellas, outdoor furniture and screens for the diner class.
$ 30 million will be allocated to local councils to streamline the new permits that will be required to expand outdoor hospitality. Some of this money can be transferred to companies in the form of reduced or waived permit fees.
Premier Daniel Andrews said eating more outdoor food would “change the way the city operates”. It can prove popular, becoming a “permanent feature” of Victoria’s hospitality, from city to suburban and district.
Mr. Andrews said decisions on the rules of hospitality are still being made, including whether perspex screens between tables would be necessary and what the density limits and spacing criteria are.
However, with regional Victoria expected to move to the third step early this week, allowing hospitality venues to once again offer table service, he said these decisions would be announced “very soon”.
The government said Sunday’s $ 3 billion package – which includes grants of up to $ 20,000 and tax credits – was the largest business support fund in the state’s history. It was welcomed by the Victorian Chamber of Commerce and Industry, which had previously criticized the Government Restrictions Roadmap as a “way to nowhere”.