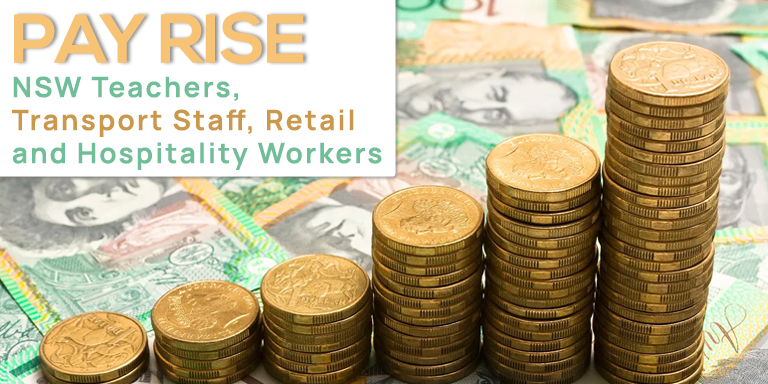 NSW staff workers have protested for higher paychecks for a few weeks now and finally, the efforts are bearing fruits. A 2.3% increase in base pay has been reported across the state as compared to the previous year.

Transport workers and staff members of other sectors such as hospitality, teaching, and retail have reported a positive increase in the base pay over last year to December. The increase in wages and salaries is a positive indication after the pandemic recovery has started across the country, especially in states such as NSW and Victoria.

This 2.3% figure is the fastest growth reported after 2019’s second quarter – a rising light of hope that the economy is finally recovering from the damage inflicted by the global crisis. After industrial action was taken by the aforementioned workers of the different sectors, pay rise has also been reported from states other than NSW.

The December quarter also reported a 0.7 growth in sectors both private and public. Specialized skilled workers, for example, licensed truck drivers and forklift operators, have mounted pressure on various authorities for a higher and a better paycheck value.

Experience and quality in staff is the major factor that has led to the growth in pay. Companies across sectors value this experience and employee retention is a paramount strategy for the long game. The biggest numbers were reported from the food sector and retail trade.

It was especially an amazing quarter for retail workers who saw the highest rate of increase in an astounding six years. A 2.6% increase for retail staff meant that it was only second to the accommodation and food sector which reported a growth rate of around 3.5% in the December quarter.

Another reason for this high rate of increase is the shortage of labour. As expected, the highest numbers have been reported by sectors that were hit the hardest by the coronavirus. Employers are willing to do anything to keep their businesses running. They are willing to shell out large pay increases just to keep their employees coming in to work.