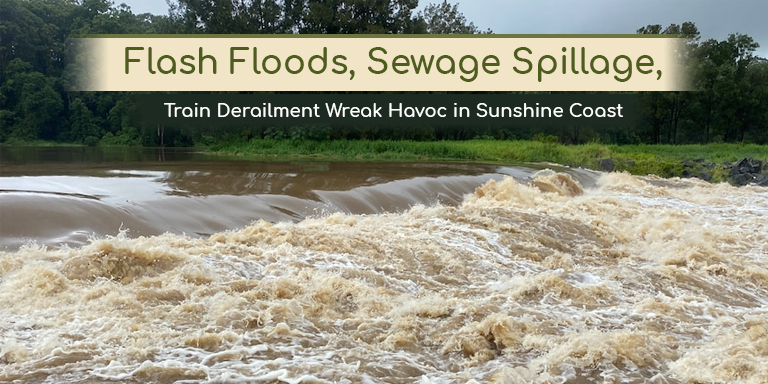 A mere 100 kilometres away from Brisbane, Sunshine Coast as well as Gympie are suffering from torrential downpours and flash flooding. Amidst this, a sewage spill on the beach has also unravelled the residents.

South East Queensland has witnessed two deaths as the region has experienced heavy rain since Tuesday. The past few days have been brutal in the area – a motorcyclist, aged 54, was reported missing and then dead due to the weather conditions.

The water level rose from ankle to waist deep within a few minutes on Wednesday, according to local sources. People were stuck in their homes, their offices, and in hospitals.

The southern end of the South East Queensland coastline also reported a sewage spill on the beach. Cleaning work is underway but the event has put a huge dent in local’s plans to visit the area. The clean-ups are taking place as we write this and the beach has been closed down.

Roadways from Brisbane to Sunshine Coast have also been blocked or diversions have been made by the authorities. The local economy has also taken a giant hit as FMCG markets are reporting downward graphs.

The sewage spill was due to a manhole overflowing on Beerburrum Street. Analysis reports, however, show a positive side – 99% of the spillage is water i.e. the toxic waste is now diluted. The authorities have issued guidelines for the locals to avoid waterways. The area has been closed until the entire clean-up is concluded.

Another incident of diesel spillage from a train has also been reported from the area. A freight train derailed on Tuesday night. The incident occurred in Traveston, south of Gympie. Aurizon, the owner of the train, has been consulted to understand the extent of the damage inflicted by the spill. The degree of spillage is yet to be determined in its entirety.

Meanwhile, government authorities and rescue programs are also underway to help save animals suffering from the rising waters. Also, animal sanctuaries have reported losses in shelters and animal feed.