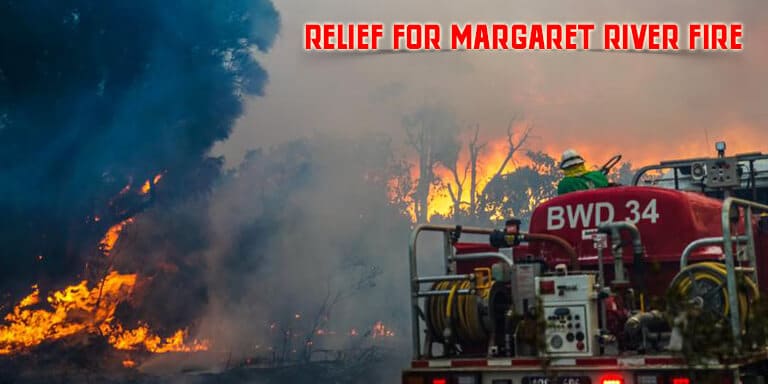 A notorious forest fire has been raging since Wednesday in West Australia’s Margaret River, just down south from Perth. Firefighters have been involved in relief work ever since but results have been slow or negligible due to unfavourable weather conditions. It’s all starting to sizzle down now, though…

First reported at 10 AM on Wednesday, the fire has been raging just south of Margaret River, in the Leeuwin-Naturaliste National Park. Moving east, the fire has now consumed more than 6,000 hectares of land. Emergency calls have been made to all residents and around 45 evacuations have also taken place.

The fire is bounded by highways and connecting roads on all sides but severe damage has been dealt with the local flora and fauna. Fireys have had little to no success in fighting this raging disaster. Weather conditions have only severed the conditions. Since Wednesday, eastbound winds and high temperatures have catalyzed the progress of the bushfire.

West Australia’s Busselton has also reported another fire near Yallingup. Temperatures have peaked at 23 degrees and humidity at 80%. After the second fire was reported, authorities have increased the alert levels and have warned residents near the area to vacate their houses immediately.

However, as of now, a slowing down of wind speed and high humidity has been reported. A light drizzle is helping the fireys manage and contain the progress of the bushfire. The Department of Fire and Emergency Services (DFES) reported that the firefighting efforts are now witnessing a few positive results. Also, the eastbound winds have changed their direction to the west and have settled at a comfortable speed of 20 km/hr.

A mild rainfall since last night has made the fireys enjoy much more success as compared to the critical days before. Authorities have confirmed that there are no burn injuries but what has happened to the properties of the residents can only be made clear after the fire has subsided. Bushfires have a huge toll on the environment and also affect the local wildlife. Efforts have been made to prevent such disasters but the West Australian climate favours such things to occur from time to time.

A permanent solution is still awaited.