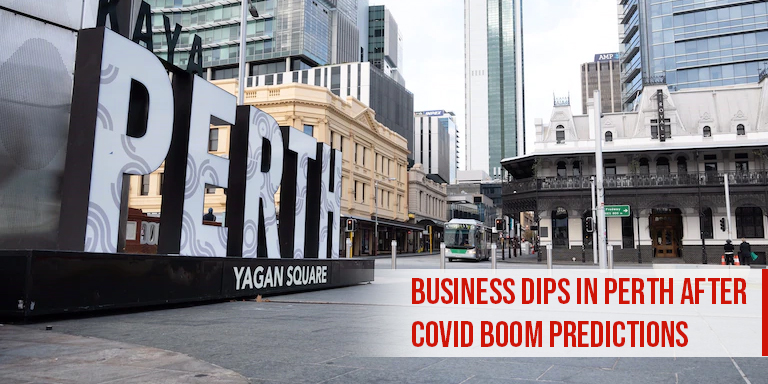 The pandemic is still having its last laugh with the Omicron variant raising panic bells in Perth. Businesses are preparing for an ‘inevitable’ closure as experts suggest a COVID wave is due to strike on the city. The city’s Central Business District wears a desolate look as we dive into this situation deeper.

After witnessing the pandemic outbreaks in Sydney and Melbourne, Perth is bracing itself for the same. Perth started reporting triple digits just this week however, the mood around the city is almost the same as it was in Sydney or Melbourne a month back. Google reports show the retail customers in January and February are almost half of what they were during the same period in 2020.

Perth has already seen businesses laying off their workers, especially in the hospitality sector. The news is grim that the situation is yet to face its final hurdle – with, as aforementioned, cases hitting triple digits.

Perth or let’s say West Australia is yet to open its borders to domestic as well as international travel. Also, Perth reported strong economic numbers when the other big cities were struggling with their economies. However, the current situation may be different. After taking an understanding of what happened in the other states, Perth’s damage control may be a negative factor for the city’s business here.

Offices have already switched to remote work and people have already started isolating themselves in order to avoid an outbreak. For these two reasons, Perth’s CBD and other markets are reporting weak numbers even when the number of cases aren’t that scary.

The aura around the disease and the brutality of the second wave, not only in Australia but also in the rest of the world is ‘fascinating’. It is reported that 64% of the offices in most sectors (which can afford it) have switched to remote work, be it IT, real estate, or finance.

The struggling sectors, as usual, are hospitality, tourism, and logistics. Because of remote work, businesses such as cafes, restaurants, and bars that rely on office-goers are going down.

Hospitality operators suggest that the most annoying thing about the drop in business is that there is no exact way to predict when it will all end. They have further stated that the hospitality sector especially and other businesses in general would need a cash infusion from the government to stay afloat.

Help from the government can also come in the form of rent reliefs or grants.