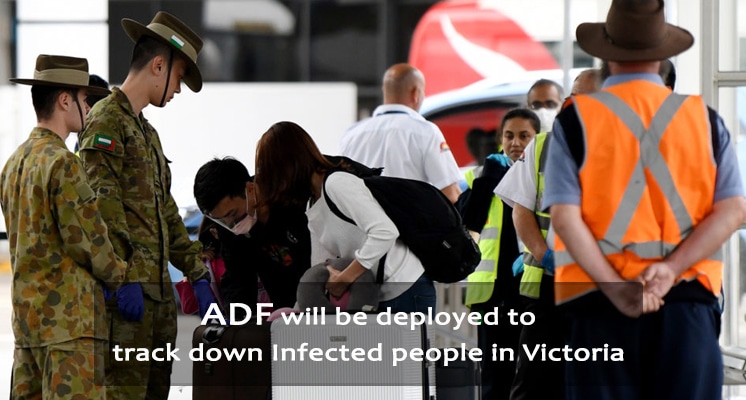 The Australian Defense Force will be positioned in Victoria to monitor individuals infected with the coronavirus.
On Friday, Victorian Premier Daniel Andrews said the state had reported another six deaths from coronavirus in the last 24 hours, along with 300 more infections. Premier Daniel Andrews said three of those who died were in their nineties and three were in their eighties. Among the new cases, 51 were linked with known outbreaks, and 249 were under investigation.
Our hearts go out to those six people’s families. It will be a particularly difficult time for them and I hope there will be some relief in the understanding that our support extends to all of them.
Six deaths is a new record in one day in Victoria, which comes after reporting a record high of five deaths yesterday.
Mr Andrews said Australian Defense Force staff will be deployed to ensure that new cases comply with the restrictions on public health. He said members of the Australian Defense Force (ADF) will be deployed in “innovative and special” ways, including helping to track communications when people did not reply to the phone.
Premier Daniel Andrews has announced that 28 Australian Defense Force teams, with the assistance of empowered officers, will be deployed to door knock people who have tested positive. However, it goes without saying that if you were knocked at the door and you weren’t found at home, you ‘re in breach of the orders because you’re a positive case and you should be at home.
Mr. Andrews said it is “unacceptable” not to contact the authorities within 24 hours of a reported case.
As part of this latest phase 65 properties have been visited since Wednesday.  In the past 24 hours, Victoria Police have conducted 5435 spot checks and issued 101 fines.
There are now more than 1400 ADF leaders on the ground in Victoria.
On Friday, Prime Minister Scott Morrison said the fall in Victoria’s rate of new infections was positive news but not a cause for pride. It can not be expected to continue and so we have to maintain the full power of the Victoria efforts.
There are 206 Victorians at COVID-19 hospital, of which 41 receive intensive care.