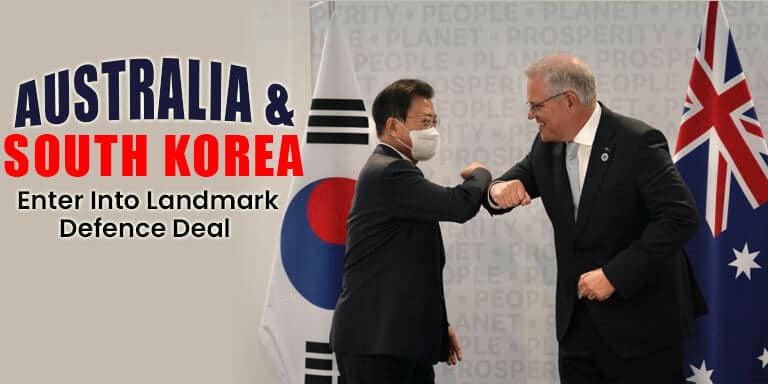 Australia’s Prime Minister Scott Morrison and South Korea’s President Moon Jae-in have signed a 4-document deal wherein two of them cover environmental protocols; zero emissions and critical minerals. The other two include a defence deal and an artillery contract.

Formal talks are reported to be underway in Canberra as the two countries have entered into a $1bn deal in the early hours of the 13th of December. More than 60 years have elapsed over which the two countries have shared a warm and healthy alliance. Australia’s involvement as South Korea’s ally in the Korean war is still considered to be an overwhelming gesture by the land down under.

The contract signed for artillery systems involves the delivery of advanced weapons including “30 self-propelled howitzer artillery weapons, and 15 ammunition supply vehicles and radars”. The move is an attempt to modernise the Australian army and develop a strategic alliance with the Asian nation. Korean defence company, Hanwha will provide the aforementioned war articles.

In addition to this, the Australian Prime Minister delivered a keynote speech wherein he highlighted the core areas where the deal would impact positively. The Defence Minister also mentioned that the deal would be a way forward for the two countries under the light of common goals.

This deal would also create 300 additional jobs in Geelong. The construction will start in 2022, which is just around the corner. The CPTPP (comprehensive and progressive agreement for trans-Pacific partnership) is a means for countries around the Pacific to develop sustainable means and move forward in a more streamlined fashion.

The Prime Minister also highlighted the alliance between the two countries in terms of education. More than 20000 Koreans pursue education in Australia. He also mentioned that the vaccination efforts of the two nations are noteworthy. Tourism and education are two solid pieces of evidence of the relationship between Australia and South Korea. The South Korean President is the first world leader to have visited the Ozzies after the borders have opened up. South Korean First Lady, Kim Jung-sook was also present during the deal.