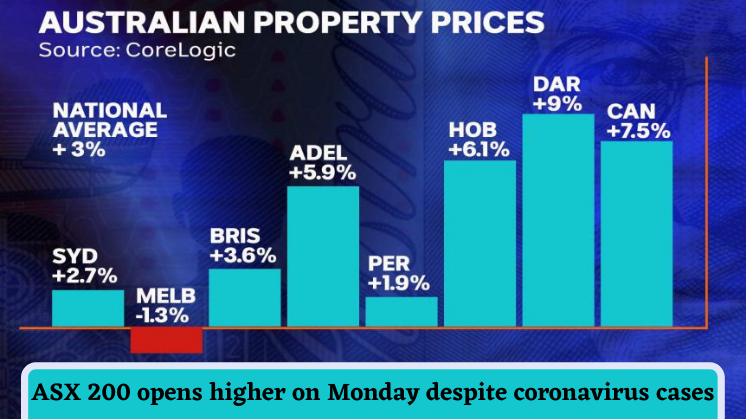 Australian shares have improved slightly despite coronavirus restrictions strictness in NSW and Victoria.
All Ordinaries and the ASX 200 both increase 0.95 per cent by 12:00 pm AEDT on Monday to 6,915 and 6,651 points respectively.
However, this rise was not expected because of the increased COVID-19 cases connected to Sydney’s Northern Beaches outbreak.
On Monday Victoria discovered three new coronavirus locally acquired cases after testing sites filled up on the weekend. Greater Sydney residents are facing a fine of $200 for not wearing face masks in indoor places.
The casino and travel stocks dipped, including SkyCity Entertainment (-1.7pc), Corporate Travel Management (-3.1pc), Flight Centre dropping early before regaining ground (+0.5pc), and New Zealand’s Auckland International Airport (-1.1pc).
Link Administrative Holdings reached the bottom movers, tanking 14.5 per cent later it stated SS&C Technology Holdings had removed its takeover bid.
Healthcare software company Pro Medicus has risen to +3.6pc, and IDP Education was a leading mover by midday increasing 3.9 per cent.
The big 4 banks have all increased between 1 to 1.5 per cent and the Australian dollar is trading flat at 77.06 US cents.
The consumer staples and technology sectors recorded the highest start to trading with Woolworths up 1.5 per cent and buy-now-pay-later company Afterpay up 1.5 per cent to $119.7.
Gold sub-index of Australia has increased approx 3 per cent with spot gold jumping 0.7 per cent to $1,911.90 an ounce.
Index heavyweight New Crest mining rose 2.7 per cent.
Chalice Mining and Dacian Gold are the highest gainers in the sub-index, climbing as much as 7.7 per cent and 8.5 per cent, respectively.
On the other hand, Brent crude futures fell 8 cents to $51.72, and US crude eased 12 cents to $48.40 a barrel on Monday.