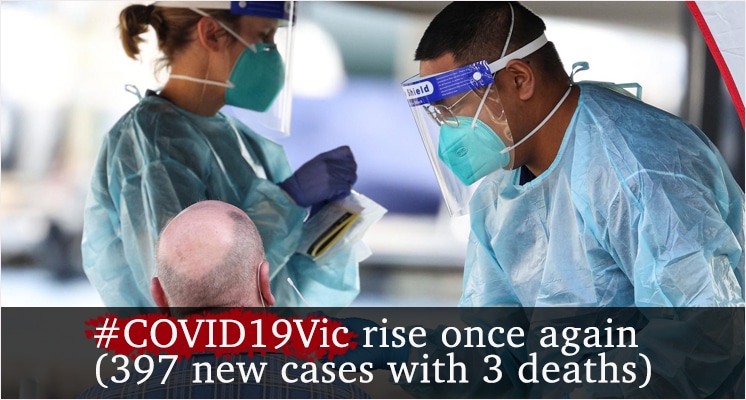 Victorian Premier Daniel Andrews says there is “growing concern” about community transmission of coronavirus, with the state registering 397 cases and three deaths. Mr. Andrews said that the three deaths were a man in his eighties, a woman in her eighties, and a woman in her nineties.
He said 397 new cases represent a reduction in the highest daily figures of the state compared to 723 and 627 recorded in the last two days
In recent days he said 49 cases had been reported as “mystery cases” or group transmission, where health authorities were unable to trace the “index case” where the infection chain started.
Of the 10,931 cases reported since the pandemic started, he said, there were at least 1,841 cases where infection could not be traced back to the original source.
Mr. Andrews said he suspected that all three deaths recorded overnight were due to “confrontation” incidents of elderly care in the state, which are linked to 1,008 active cases.
He said Victorian hospital nurses had worked 570 shifts across aged care homes across the state since they were brought in to assist with infection prevention and resident treatment.
Mr. Andrews said today was “not the day” to announce any more restrictions but the government was “looking about all these things,” including the potential expense of tougher measures.
He said what Victoria has done so far has prevented the state from dealing with thousands and thousands of new cases, but “what we may do now may not be enough.”
We can not open up again at these types of levels, so very careful work is being carried out into what the next potential steps could look like. Then, he made a plea that all people should obey limits on coronavirus.
“You have to think for a moment. Our health team’s nurses and physicians and emergency paramedics are stepping up and doing their part,” he said.
Mr. Andrew asked people to play your part in this epidemic.
Police Minister Lisa Neville said that the police are still finding some people who are breaking safety guidelines.
Recent examples include one driving from Melbourne to Wodonga “to get a Big Mac”, another driving from Melbourne to Ballarat to get “fresh air” and someone traveling through Melbourne from Werribee to Springvale to buy groceries, Ms. Neville said.
“These people got a fine yesterday,” she said.
This is egregious and immoral conduct that needs to be avoided. We all have a part to play here.”