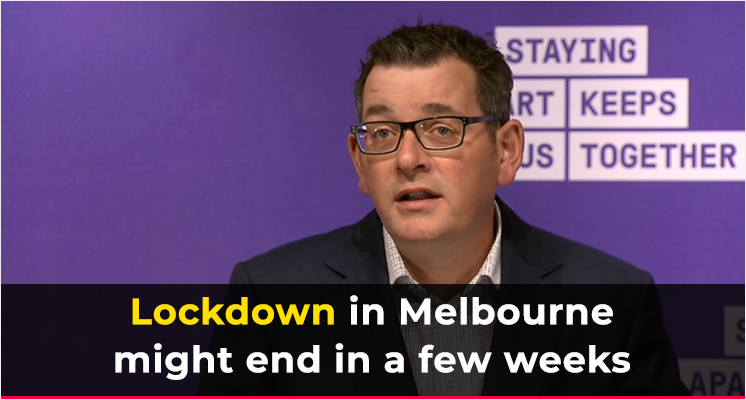 Victoria’s daily toll declined again, with 11 new cases of coronavirus and two deaths recorded overnight. It’s the lowest 24-hour increase since nine cases were recorded on June 16, bringing the average 14-day rate in Melbourne to 34.4.
Metropolitan Melbourne must reach an average daily case rate of 30-50 for two weeks to begin easing lockdown measures from September 28.
The most recent deaths include two women, one in her 80s and the other 100 years old. Not only a good day but a great day, said Daniel Andrews.
We are seeing numbers drop and we see these strategies.
We will need to continue down the path though if we are to open our doors, these numbers are still very high … We just have to continue the path on this matter. Ultimately, these are very good numbers.
Victoria currently has 657 active cases, including 332 in aged care and 79 in health care workers.
More than 7,100 test results were processed in the past 24 hours, most of which were taken on Saturday.
Five of the new infections on Monday are related to a known outbreak, while six are still under investigation. No new cases have been discovered in Casey municipality, with the Hallam disease outbreak now at 43 – an increase of three.
Over the weekend, the premier noted a rise in social activity powered by the sunny weather and reminded the Victorians of the hazards involved.
“I wouldn’t say I’m nervous about it. I realize that when you allow more activity and groups, be it formal or informal, there is danger.
Meanwhile, in the past 24 hours, the police have issued 177 penalties for people violating the restrictions on COVID-19.
They included a man who drove his car from Coburg to visit a grocery store in Bacchus Marsh, another man traveled from Doncaster to Frankston because he wanted to visit a park and a group of six were caught in a city apartment.
A total of 13 people were fined for not wearing a face covering, 6 others were stopped at vehicle checkpoints and 45 people were arrested violating the curfew. More than 1,170 random searches were carried out in homes, businesses and public places.
As many as 20 Melbourne residents have been arrested trying to flee the city since corona virus restrictions were eased in Victoria borough last week.
Victoria Police Chief, Shane Patton, said on 3AW Radio that between 10 and 20 people have so far faced a fine of approximately $ 5,000 for the new crime of not complying with the requirement to remain in a restricted area.
Patton said seven of those were released in the first 36 hours after Thursday’s new $4,957 fine came into effect.
He said about 40 people have also been fined $ 4,957 for breaching self-isolation requirements since the violation was introduced in early August.
Despite Monday’s promising update, Andrews said that Victoria state residents need to be patient while the models are remodeled.
He also highlighted the risk of reopening too soon, saying, “If I were to say: ‘I’m going to open these 10 different settings because we’re ahead of schedule, we won’t see results for two to three weeks.