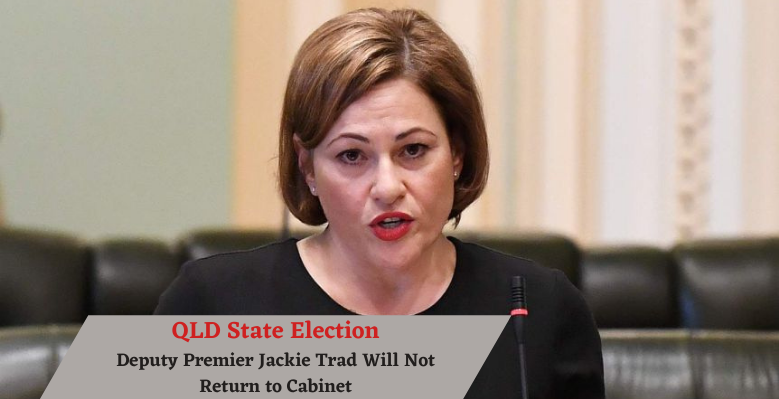 Premier Annastacia Palaszczuk is confident that if Labor is re-elected, former Vice Leader Jackie Trad of Queensland will not return to the frontbench.

Ms Palaszczuk would not clarify on day seven of the election campaign whose decision it was or whether she would be running in her seat in South Brisbane with Ms Trad, Who has described being in my political life’s struggle.

She is a good voice for her local society and I wish her all the best, Ms Palaszczuk said at a press conference on Bribie Island, I will be out and about supporting our candidates around the state.

The Premier’s remarks came just hours after Ms Trad announced that she was not pursuing a return to Cabinet on social media. At a time when Campbell Newman and the LNP achieved the greatest win in political history, I put myself forward to serve my party, she wrote in a Facebook post.

At the point, the only hope was a long, hard pull of resistance. I have always put myself forward to serve my culture and to fight for it. Let me make it clear that I don’t want a return to the Cabinet. In truth, like many of my colleagues are, I’m in the fight of my political life.

After the Crime and Corruption Commission (CCC) announced it was probing her role in the appointment of a school principal, Ms Trad resigned from the Cabinet in May. Ms Trad was cleared by the CCC of corruption charges in July.

Ms Palaszczuk said yesterday that she was satisfied with her new cabinet.

Asked if Labor won the election, Ms Trad would be invited back to the ministry, she replied: “At the moment, there is an election and people have to fight hard to win their seat.”

Ms Palaszczuk described the project as an “Australian-first” and a “game-changer” for healthcare access to neighbourhoods, costing $265 million over four years and financed with borrowings.

It means that families are not going to have to go to hospitals … they’re going to be able to get care close to home, she continued.

Just imagine, to access these health facilities like chemotherapy, or mental health service or kidney dialysis, you just have to head down the road to your local city.

[Imagine] not having to think about the stress of long-distance commuting and then having to find a parking lot. Meanwhile, another day of zero COVID-19 cases was registered in Queensland, with just four active cases left throughout the province.

Health Minister Steven Miles said 110 people were screened yesterday in Townsville after signs of coronavirus were detected in the city’s wastewater in recent days.