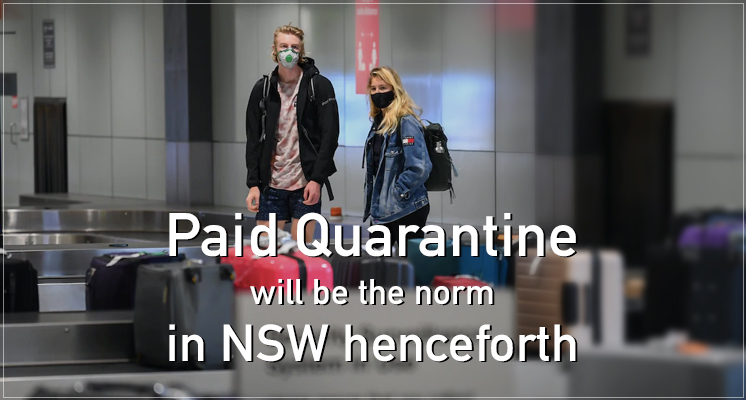 Australians and permanent residents who have been residing out of the country have been allowed to return back home. However the arrival is conditional. People landing in the country from overseas will have to undergo a mandatory paid hotel quarantine for a minimum of 14 days which will cost them $3000. On Saturday NSW has announced that it will also charge returnees the same amount that is being charged by Queensland, WA and NT. Victoria is still closed to international arrivals.

When raised questions about it state and territory governments have stated that have had given enough time to Australian and permanent residents to come back and take advantage of the free hotel quarantines in the past few months.

However there’s yet another aspect to it. Many Australians and permanent residents stuck abroad can’t just leave their lives over there and come back at the drop of a hat. Apart from that there are many people who have had their tickets booked a long time back however their flights were canceled due to the worsening situation and freeze on international flights in Australia and other parts of the world.

People looking forward to move into their homes in Australia are not really happy with the extra burden they will be getting while entering Australia since the situation in terms of finances is already grim in almost all parts of the world. Many of those looking forward to enter Australia in the coming days are coming back due to family emergencies, due to financial constraints and inability to support themselves in foreign lands and even due to their loss of work.

People planning to come back are of the view that if the quarantine is mandatory then it needs to be free. However the governments have already announced that their coffers are already empty since they have had offered free quarantine in the past few months to a lot of people coming into Australia from around the world. People looking towards their homes in Australia say they don’t have six figure jobs which might allow them to first buy inflated air tickets to return to Australia and then spend another 3000$ to remain in quarantine.

People stranded abroad have urged the government to remove the cap on international flights and start free quarantine facilities again to ensure the easy return of people stuck abroad since international flights have been cancelled almost 4-5 times in the past with no or partial returns of the fare that was paid by them. Expectations from the government for help with regards to expats and Australians caught in a financial mess abroad are not unfound however the government with empty coffers will have its own limitations in helping out people.