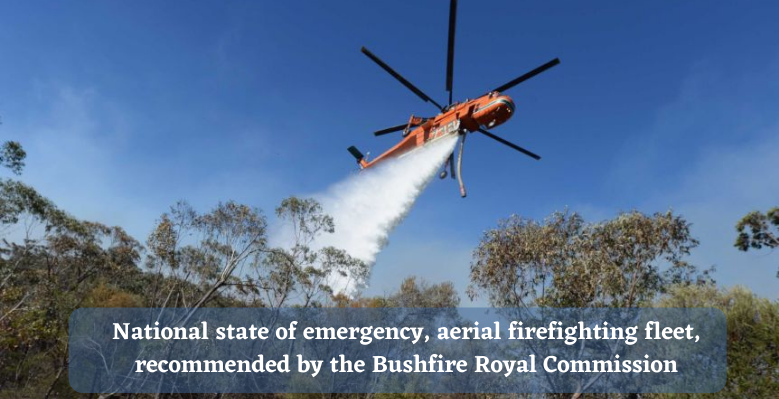 The Bushfire Royal Commission has recommended the implementation of a national state of emergency. An all-hazard emergency warning app and a national fleet of water bombers is set to be deployed in order to prepare for the bushfire firefighting season. The investigation was called in the aftermath of the destructive summer bushfire season 2019-20 but looked at Australia’s preparation for all natural disasters and response.

The 80 recommendations include advice on how to organize all levels of government during emergencies, public alarm systems, firefighting services, climate data, the position of the Australian Defence Force, and how charities and other organizations can respond best in the event of trauma.

David Littleproud, Minister of Emergency Management, announced that the Government would carefully and methodically consider the report and its recommendations. The commissioners were entrusted with an enormous job by the Royal Commission on National Natural Disaster Arrangements: to figure out not only how to avoid the magnitude of potential bushfire seasons, but all natural disasters.

The Royal Commission recommends that a law be established by the Federal Government to declare “a state of national emergency.”

Critically, even though states and territories do not expressly ask for assistance, but only under “clearly defined and restricted situations,” the new law should grant the government the power to take action.

Mr. Littleproud, speaking after the report was released, said it would require a simple “trigger point” for the government and would allow it to mobilize national agencies to start responding nationally.

This does not imply that he said, the Federal Government will step in to take over the operational control of the fire.

Keeping a national state of emergency, the commission states will make it clear to the public how bad the catastrophe was. The commission heard smoke from the summer blazes killed an estimated 445 individuals during the hearings and there was uncertainty about when it was safe to go out.

A nationally consistent air quality guide, which is revised in real-time, is now recommended so that everyone is on the same page about what is, and is not, a harmful level of smoke pollution.

The Commission also needs more community education and guidelines on smoke risks, as well as tailored advice for vulnerable groups. It calls for the establishment of national forecasting capabilities on smoke and other contaminants, such as dust and pollen, to “predict plume activity” in a separate recommendation and provide advice accordingly.