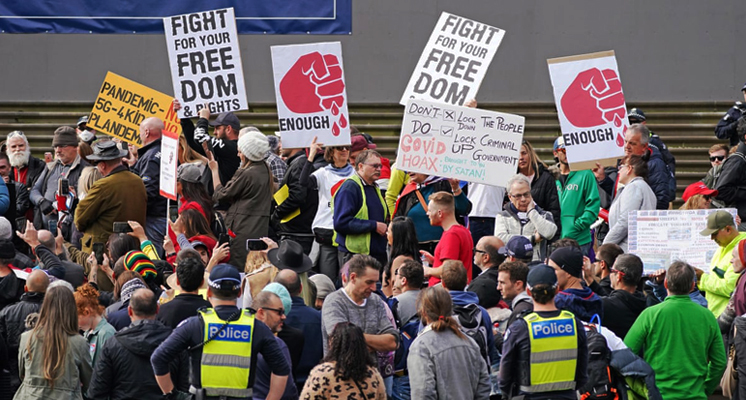 With the ever increasing fatalities due to corona virus with the government taking all measures to curb the infection there have been a few protests to oppose the lockdown one of which led to an ugly situation in Dandenong resulting in the arrest of four people.

Victoria Police did talk on this specific issue but said that such protests had become a recurring event and warned people from joining such protests since they had already arrested four people and slapped fines on nine other who had been a part of the protest. Victoria Police has made it clear that they wont hesitate in taking appropriate action against people who wont be following the lockdown rules. Fines and arrests will be made without hesitation. Dandenong’s post code has a total of 84 active cases of Corona Virus and such incidents might escalate the situation.

Meanwhile there was no respite in the increasing number of infections and fatalities due to Corona virus. Victoria recorded 23 deaths and 113 new cases yesterday. Victoria has 3308 active cases currently which is quite a high number. 532 cases of corona virus are being treated in various hospitals out of which 29 are in intensive care. A total of 14,837 people have recovered and returned back to their normal life. This is the current situation so far in Victoria.

A ray of hope however has come from the University of Queensland where scientists have issued a call to volunteers for the trial of a vaccine that is expected to tackle the deadly virus. The call has been extended to Queenslanders aged 56 and above since the mortality rate is highest among seniors.