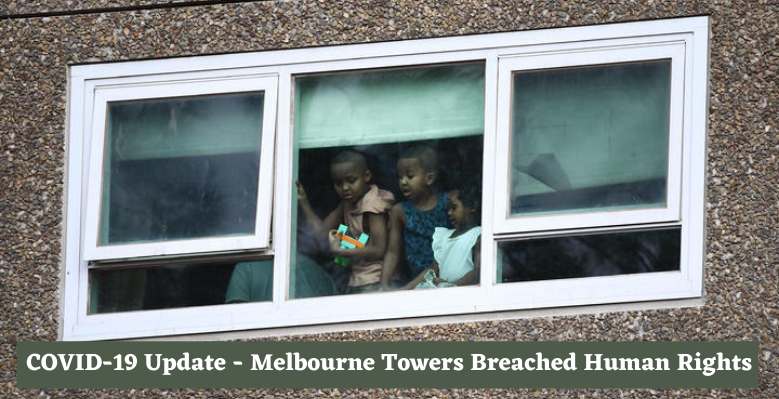 An ombudsman found that a strict lockdown in nine tower blocks in Melbourne breached human rights laws due to the sudden outbreak of COVID-19 cases.
Further, the investigation revealed that the building authority confined more than 3000 people under police guard from 3rd July for up to two weeks. This all happened after a state government order was released.
Reports suggest there was no notice given to residents, meaning people were confined without medicine, food, and other essential items, says the ombudsman.
When asked, the Victorian Government denied any breach of human rights laws, instead referred to the act as a mandatory action to safeguard the people from a deadly virus.
Debosh Glass, a Victorian Ombudsman, investigated the matter and found that the controversial snap imposition of the pandemic lockdown was a verdict released by the state government, and not on any health advisories.
During this time, more than two dozen confirmed COVID-19 cases were found out in the towers. This encourages a desire for swift containment zone.
To this, Mr Glass said, “Many residents knew nothing of the lockdown or the reason for it when large numbers of police appeared on their estate that afternoon,”
“Residents [at that tower] waited more than a week to be allowed outside under supervision for fresh air,” he added.
The lockdown lasted for around five days for most of the residents, whereas it continued for 14 days in the towers which were affected the most.
Richard Wynne, Housing Minister, said, “We make no apology for saving people’s lives,”
Further, he said, “We don’t have the luxury of being able to think about this and think, ‘oh well, maybe we can do this in a couple of days’. We had to act and act immediately because of the viciousness of the virus.”
At the same time, some of the residents came forward and spoke to the BBC about how their residential area was covered with heavy policing and harsh restrictions overnight.