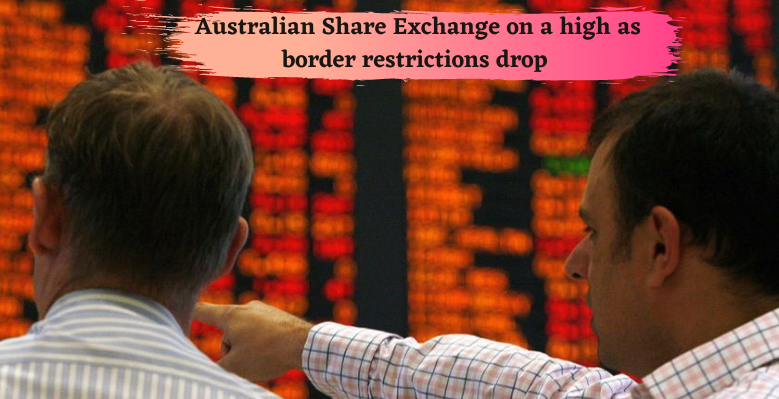 Australian investors are feeling optimistic because the Australian share market is reaching a nine-month high. It happened when the border restrictions between New South Wales and Victoria lift.
The two biggest states of Australia have been reunited officially after being apart for four months.
Day’s trading by Qantas has already started with the announcement of plans by adding more flights between Melbourne and Sydney and boosting passenger capacity.
The airline declared that their capacity would rise from 30 per cent of pre-COVID levels to 40 per cent.
Qantas said more easing between other states of Australia might see its domestic capacity rise to approximately 60 per cent by Christmas.
Its shares were up 1.7 per cent to $5.36 by 12:30 PM, which was the highest since its shares crashed in March to just $2.03 when entire Australia was shut down by Federal Government and restricted the state’s borders due to COVID-19.
The benchmark Australian Stock Exchange was up 0.5 per cent to 6,572, its highest level since shutdowns in the month of March.
Technology and Energy stocks were trading up on the announcement of restrictions easing.
Resources companies Fortescue Metals jumped to 5.6 per cent, and BHP jumped to3.7 per cent.
Village Roadshow rose 16.7 per cent after the theme park operator received a sweetened takeover proposal from a suitor, BGH Capital.
However, a superior insurance corporation is becoming a hit.
Meanwhile, Insurance Australia Group shares on Monday dropped from 5.9 per cent to $5.14.
The business went into a trading halt the last Wednesday when a test case about COVID-19 payouts by insurance groups delivered a wonder result in favour of small companies who have lost income because of the lockdowns.
That result has shaken the insurance business and could mean insurers face hundreds of millions of dollars in extra payouts.
Also, on Monday, IAG resumed trade by issuing new shares on the market at a discount.
IAG sold 128.7m original shares for $5.05, a 7.5 per cent premium discount to its closing share cost before it becomes a trading halt.